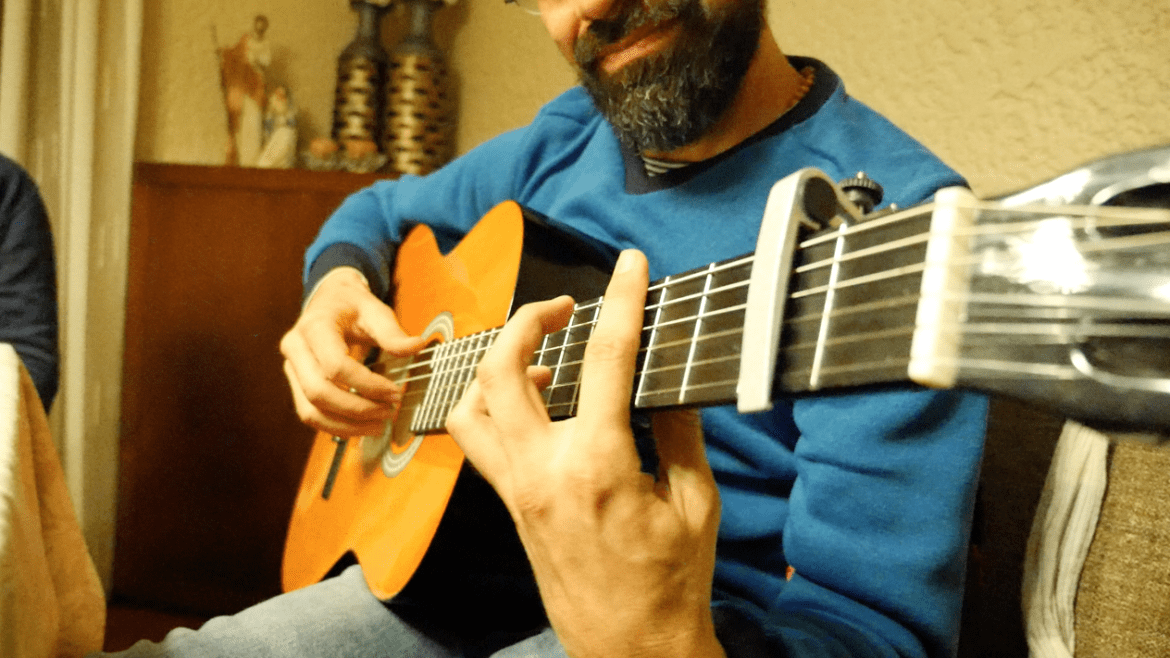 Musicians, magicians and other wizards

The other day I was watching a short video class by Dominic Miller, the guitarist of Sting’s band, and he said something that made me think about how some musicians approach the instrument, especially when they are learning a new song, scale or technique. Miller says that when he practices music, playing fast is not the important thing:

For me, playing the guitar, the sound is king. If I can’t  get a good sound, I can’t really go forward. And so when I practice, I might do it really hyper-slow, just so I can focus on the sound and on every note being as important as the one before and the one after. So it’s just like really being in the moment.

Unlike, say, runners, who have to run faster in training sessions in order to achieve running faster in a competition (and this is actually a debatable statement, but let’s go with it for now), musicians don’t necessarily have to play fast all the time during practice in order to be able to play a Paganini composition, a Tito Puente drumroll, or a Steve Vai riff. Paradoxically, doing things slower can lead to greater speed and more precision. The secret here is accuracy, and more importantly, awareness of what you are doing. If your practice is automatic, if you do something repetitive without being aware of how you are doing what you are doing, the number of repetitions becomes irrelevant. It’s not about brute force; it is, like Dominic Miller puts it, about «really being in the moment».

Last week, Ricky Jay, one of the greatest sleight of hand artists in history, passed away. With a deck of cards in his hands, Ricky Jay could do baffling acts that surpassed belief. He could make cards (and other objects) disappear and appear at will, and he took the «pick a card» genre to a whole new level. A true Renaissance man, Jay was also an actor, an accomplished historian and a celebrated author, and he combined magic tricks with storytelling, using his onstage charm and his vast knowledge to mislead the attention of the audience and distract his «victims» from where the real action was happening. But his was not just an act of misdirection; Jay was not a mere cheater. The real magic was in his deft hands and his ability to move his fingers in such precise and fast manner, that the audience’s skepticism couldn’t keep up with his skill.

When he was asked about his well-known habit of practicing for many hours in a row, Ricky Jay said:

It almost becomes a meditative tool, the shuffle of cards for more than two, or six, or eight, or ten hours a day, but it’s not the best way to practice. My mentor Charlie Miller made me think about the importance of refining practice (…) Charlie was inclined to work on the specifics of one particular move and the finest points and the finest subtleties of this particular move. I learned from him more about how to refine practice, about how to consciously try to make this move better every time you do it.

Once again, perfecting a skill is not about mindless repetition, it’s about bringing your awareness to how you do what you do. And this applies not only to fine-motor activities like playing an instrument or doing an act of prestidigitation; this goes for the larger-scale actions as well. You can increase your muscular mass by mindlessly lifting a weight over and over for a long period of time, but you will become more efficient at using your strength if you do small, effortless and weightless repetitions —and only a few at a time— paying attention to how you do each one of them. This, among other things, leads to understanding better your patterns of movement, and helps you refine them so that you become more adept at doing anything, be it making an audience cry by playing the violin beautifully, or kicking someone’s ass by engaging them in a judo lock that will lead to an unavoidable defeat.

I started reflecting about all this when I was preparing an Intelligent Movement workshop and I was doing some old classes from different teachers of somatic techniques.

In these lessons we move so slowly and so gently that some people have the initial sensation that they are not doing anything and feel the urge to amplify the movements and to increase the speed in order to feel that they’re not «wasting their time» (and their money). So conditioned we are by the «no pain, no gain» and the «faster, higher, stronger» culture. The interesting thing happens when the class is done and the student gets up from the mat and begins to realize that doing less actually led to a greater change in posture, a higher understanding of his or her actions, and that what before seemed impossible now becomes accesible, and the awkward, hesitant action now becomes elegant.

It is hard to change old habits and to go against deeply-rooted beliefs on how to use our body organization and how to become better at what we like to do. But musicians, magicians and other wizards know that the real secret is not in the mindless repetition, the blind chase for speed or the brute, forceful cultivation of muscle. Consciousness has its place in this game, and it is of no small importance.

Ernesto Cortés teaches online classes of LK Intelligent Movement, every Thursday and Sunday. His next free class will be on Sunday, June 7 Click here to learn more about this class. He also offers workshops for body-mind techniques practitioners. You can contact him on Facebook or Instagram.

Watch Ricky Jay perform «Cups and balls», the oldest magic trick in the book, with a series of unexpected twists. Seeing him entertain and educate at the same time (all his stories are well-researched historical accounts) is pure delight. Enjoy the magic:

Healing movements with Alper and Ernesto